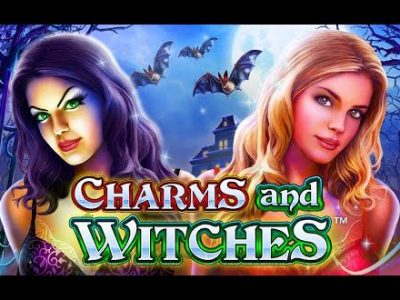 Rating:
The Charms and Witches Slot game by Side City Studios and NextGen Gaming is spooky, but fun slot game. It features 25 pay lines for betting fun that span across five reels. All of the spooky Halloween themed symbols in this game appear to change to something else when a win is a hit which adds to the creepy, fun factor. This slot does not only supply visual and audio fun for a player as it also has several different ways for the player to win some big cash.

The scatter symbol in this spooky slot game does not take much guess as it says Scatter across the picture with a flying bat in the background flying through the night sky. When three or more scatters appear on the pay lines that the player bet on it triggers the bonus game feature. During the featured round, players will take part in the Pick Me game. During this featured round, the player will spin a reel and will win an instant prize when the word Pick Me appears on the 2nd, 3rd, and 4th reels. When three or more scatters appear on the reels it will trigger the free featured spins where players will get ten free spins. During free featured spin rounds the prizes will all be doubled for the player. 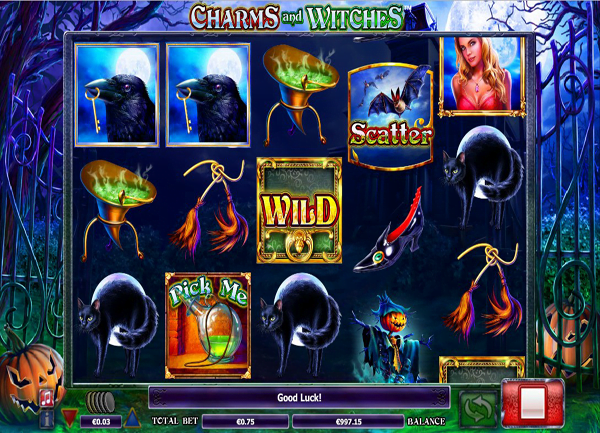 The bonus round is triggered when three or more spooky bats land on pay lines that have been bet on during the round. This is when the Pick Me feature of the game comes in. Here a player will pick the symbol they want for a chance to win either cash, cash plus the Pick Again feature again, or the Win All option where they win all three prizes.

The wild card for the Charms and Witches Slot game is a golden and green card with the word WILD written on it. When the wild card helps the player hit a win during a round will find that those wins are doubled because of the wild. During any round, a flock of creepy looking bats may fly across the screen. Players should not panic when this happens as it is a good thing. When these bats fly over the screen, they turn symbols on the reels into wilds. These bats make even more appearances during any of the free spins than during normal gameplay.

A blonde haired witch is another symbol that appears in this spooky little slot game and is one of the higher paying random symbols. During game play when one or more of these blonde pictures appear on an active pay line players will watch the blonde turn to a brunette and then back again. A giant rat is another creepy symbol in this game as is pictures of a black crow that turns into a wizard, a black cat, a witch’s shoe. Any of these symbols help a player win cash when 3 or more of them appear on pay lines that have been bet on in one round.

Placing a wager on this spooky slot game is a bit different than on other slot styled casino games. On the bottom right of the game screen, a player will notice they can bet a minimum of .01 credits up to a maximum of 20 credits. The arrow keys to the right and left of the money box will raise or lower the credits used. Above the money box, players will see coins. Pressing on these coins will also raise or lower the bet amount. To the right and in the middle of the lower screen of the game players will see a number of credits that will be used in total for that round. Just beside that box players will see the balance of money that they have in their account. The Charms and Witches Slot game does have an auto play option where players can choose a number of spins that they would like the game to spin by itself. It does not have the options of stopping for wins or when an account balance falls below a certain level.

Players looking for some spooky fun will find the Charms and Witches Slot game right up their alley. This slot includes several creepy images that revolve around a Halloween theme and the audio supplies an even higher creepy factor. The possibility of winning on this casino slot game makes it even more exciting.